Posted at 16:32h in Print, TV/Video by Justin Harcrow

SUMMIT COUNTY, UTAH — With all the worries this year about wildfires, it seems like a good idea to have a home that won’t burn. And that’s just what Summit County resident Lance Stretch has. Stretch is in the process of moving into the fire-resistant home, the first of its kind in northern Utah. The logs that hold his cabin together are not logs at all: they’re made of concrete. 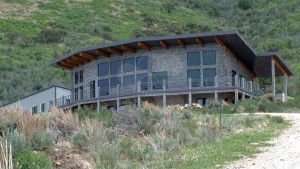 “Most people come up here can’t tell the difference,” Stretch said. While Stretch opted for the whitish, weathered driftwood look, homebuilders can get fake logs in whatever color they want. Most people opt for brown or red. The concrete homes are built by the Montana-based company EverLog Systems, which is headed by former University of Utah quarterback Stewart Hansen. He said the idea was inspired by wildfires 12 years ago that claimed hundreds of Montana homes. “That prompted the basic question we asked ourselves, which was: Well, how do you build a log home that doesn’t burn?” Hansen explained. “And the obvious answer is you build it from something that isn’t wood.” Threat of wildfire is part of what prompted Stretch to buy, “and knowing that it would be a problem out here in the high desert, it made sense to go in that direction,” he said. Utah Wildland Urban Interface Coordinator Tyre Holfeltz supports the concept of fire-resistant homes, especially alongside wild land. “Homeowners need to be aware that we live in one of the highest fire-prone environments in the United States,” Holfeltz said. But he says real logs stand up nearly as well in a typical wildfire; a home usually gets intense heat for 30 minutes max. “A real log can withstand that much heat just as well,” Holfeltz said. But that doesn’t deter Hansen or Stretch. 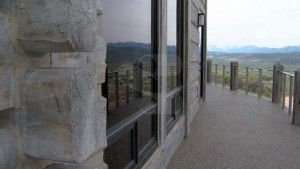 “I think wildfires can burn long and hot for a long, long time,” Hansen said. “So I think the extra protection you’re going to have with one of our homes is certainly going to far exceed what you’re going to have with a wood log home.” “Concrete doesn’t burn. At some point, the log homes, a traditional log home is going to burn down. This isn’t,” Stretch said. Because the so-called logs require no maintenance at all, Stretch figures he’ll get his extra investment back in about five years.